Stadler Form Hydrometer
In an age where virtually everything is measured for us, instantly and electronically, the last thing many of us want to do is fiddle about with thermometers and wet cloths. Thank heavens, then, for electronic hygrometers. Typically, they measure the capacitance or resistance of a sample of air and calculate the humidity from that. In a capacitive hygrometer, there are two metal plates with air in between them.

The more water there is in the air, the more it affects the plates' capacitance (ability to store a static electric charge). By measuring how much charge can be stored, it's possible to measure the humidity quickly and accurately. In a resistive sensor, electricity flows through a piece of ceramic material exposed to the air.

The higher the humidity, the more water vapor condenses inside the ceramic, changing its resistance. Measuring how much current flows through the ceramic gives an accurate measurement of the humidity. 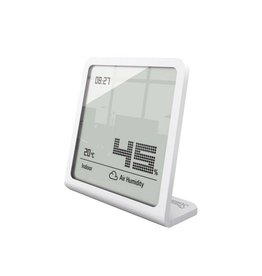